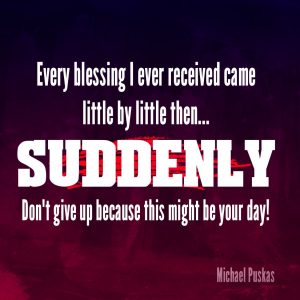 When the people looked at him they said, “Man is he lucky!” “Who is lucky?”  “Thomas Edison” was the response.  Isn’t that the typical response when people see someone succeed and become wealthy?

People look at the likes of Steve Jobs, Bill Gates, Donald Trump, Tiger Woods, Jim Carey and declare they are lucky.  Are they really lucky or is their something else?

Their secret is “little by little.”  Take Thomas Edison for example.  He tried again and again to create a light bulb that would stay lit longer than a few seconds.  He tried more than 10,000 times.  Day after day, little by little, he kept at it.  He had a dream and was determined to achieve it no matter how long it took.  The guy was relentless until…SUDDENLY.

Suddenly in a dream during a catnap he found the answer to his dilemma.  The dream revealed the secret he long sought after.  To outsiders it looked like a stroke of luck, but to Mr. Edison it was the result of his little attempts, taken consistently, day after day that produced that sudden moment, that moment of success.

Not one of the people I mentioned above were lucky.  They had dreams and were determined to reach them, no matter what the cost.  History is littered with people who “appeared” to be lucky.  To them it was hard work.  To them it was trial and error, failure and success.  To them it was moments of defeat.  They went up and down on their journey to success until they reached their “suddenly.”

To the casual observer their success was sudden.  But if you study their lives, it was the consistent little things that made the big difference in the end.

Do you want to have success?  If so, you must pay the price to do the little things, day after day to get the big results you long for.  I had a dream of making over $100,000 a year.  I didn’t think it was possible for a high school graduate.  Then one day, on a whim, I got into sales.  I was scared and didn’t know what I was doing and knew nothing about the industry I got into.  However, I did little things consistently day after day.  I called on people.  I listened to cassette tapes.  I called on more people.  I read books.  I listed to more tapes.  I learned by observing my boss.  Little by little and day by day, though frustrated at times, I never gave up.  Within 5 years I went from a $24,000 annual income to over $100,000 a year!  How did I do it?  Here is the formula for success:

Most people gloss over the little things and thus miss the big moments.  They start and quit, never giving their dreams a chance to be realized.  Don’t let that be you.  What is your dream?  What is your goal?  Whatever it is, start with doing the little things, consistently, day by day and before you know it you will experience your SUDDENLY!