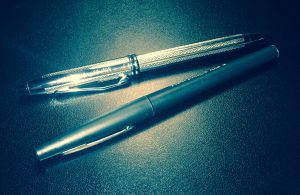 The successful have learned a very important lesson:  To distinguish themselves.  In other words, they have learned how to set themselves apart from others.

In today’s competitive market it is vital that you find ways to set yourself apart.  I am not talking about how well you dress, how beautiful your makeup, if you have six pack abs, or anything outward.  I am talking about distinguishing yourself by who you are within.  It has been said that we are all the same value from the neck down.  What matters is the way we think.  It’s our thinking that truly distinguishes us from the crowd and determines our value in the marketplace.

Years ago when I was seeking work in management, I was approached by a head-hunter in Atlanta who asked me if I considered a sales career.  Prior to that others said that I would be good at sales, but I was scared spitless when considering becoming a salesman.  The unsteady income made me feel uneasy.  And even more so I was wondering, what if I fail?

At the time the head-hunter approached me I was ready for change and was willing to take a risk.  I met with a security company in Cincinnati.  Now keep in mind, I knew nothing about security and little about sales.  Eventually I was hired.  I found out later, that based on my resume, the sales manager had NO INTENTION of hiring me.  They were interviewing me based upon a favor to the head-hunter.

Why then did they hire me?  Well, during interview the sales manager and I got into a conversation about books and audio tapes (no cd’s at that time).  He was impressed with what I was reading and who I was listening to.  It was not on paper, but in the interview, that what was within me came out and that is what distinguished me from all others.  Others had the credentials, the nice resume’s and sales experience, but I had something they didn’t have:  I was different.

What separated me from all others was what I had sowed into my mind during the prior 2 years.  I listed to Zig Zigler, Tom Hopkins, Anthony Robins, Earl Nightingale, Stephen Covey and many others.  My knowledge and enthusiasm won me that sales position!

Here I was with little sales experience; no college education, taking a sales job in a field I knew nothing about and I went from a low 5 figure income to a six figure income in a very impressive period of time.  What made the difference?  I invested in my mind and by doing so, I distinguished myself.

I looked average, but I didn’t think average and it’s my thinking that made me uncommon and valuable in a competitive market.

What are you doing to DISTINGUISH yourself?  Are you doing what everyone else is doing:  Going to college, having fun with your friends on weekends, watching television in your spare time, or playing endless games on your mobile device?  What are you doing to set you apart from the pack?  Until you willing to do what the common person will not do, you will never stick out when opportunity comes knocking.  Success is seeking the uncommon person with uncommon dreams and uncommon knowledge.